There is crime in San Antonio. Lots of petty crime. Minor muggings maybe. And yet it is considered one of the safest cities in the US. A world safer than Laredo — 2 hours’ drive to the south. I’d arrived at my hotel — the Crowne Plaza — at 11:45pm on a Monday night, hungry. Front desk told me there was an all-night food menu (non-descript sandwiches) or a good all-night Mexican restaurant a $6 cab ride away. I inquired further on how far away the restaurant was, and was told 6 blocks. Six blocks? I can walk 6 blocks. ‘There are a lot of homeless people in the park, which you have to cross to get to the restaurant, said front desk; they advised I should take the cab.

I set out to walk to the restaurant, with eyes wide open. The streets of San Antonio are dead at midnight. Everything’s shut down. With such a warning in an unfamiliar town, you walk assuredly down center of the street — no sidewalk to get hemmed in on. A homeless person sleeping at a storefront here and there, but besides the desolate streets, nothing to get excited about on the way over to the restaurant, which seemed more like 11 blocks away — a 10 minute walk at least. When I arrived, there were a few people milling about near the restaurant. As I got closer, I realized it was a middle aged Asian woman, and two cops with bicycles. “and they just took the money?” I heard one cop asking her. She nodded; seemed very perturbed. I realized she had just been mugged. The cop directed me to the restaurant upon my asking him if he knew where it was. The place was full inside — a huge restaurant with bakery up front. I ordered takeout Mexican, and did the 10-minute center-of-street walk back to my hotel room.

I realized the next day I had picked a hotel 15 minutes walk (opposite direction from restaurant) away from the Alamo and the Hyatt and the Convention Center — the center of the Riverwalk, where all the tourists are. That section has no evidence of any desolation or muggings. The Riverwalk dominates San Antonio and it is quite enchanting. You are truly on vacation as you walk it — it is a canal — about 50 feet wide — that runs in a big loop through the center of San Antonio and out — seems over a mile long, and there are branches. Loaded on both sides of the canal are restaurants (and a few shops and hotels but mostly restaurants), with open air patio seating; it seems like ..Venice, although I’ve never been to Venice. It is gorgeous. It is laid back by day; festive at night, with the bustle of groups of people walking this way and that, to dinner or just an evening walk. As the bustles walk past each other, one has to make sure that if you are on the edge of the sidewalk closest the river, you don’t get accidentally pushed in. One can’t be ‘too nice’ on the sidewalk around the Riverwalk. I learned later that there is no fine if you fall into the river sober; and a $500 fine if you fall into the river and fail the breathalyzer test. You’d imagine Riverwalk has a long history of accidental fall-ins and purposeful college-age kids jumping in en masse.

Riverwalk Riverwalk, Riverwalk — is that all San Antonio has — the Riverwalk? Well the Alamo is there, a few blocks from the Riverwalk by the Convention Center. And there’s the basketball arena where the San Antonio Spurs play. San Antonio is a military town; there’s a big Air Force base. So many of the residents are former military folk — much like San Diego.

While there, Sami, a work comrade and friend, forgot his Blackberry on the table at a Riverwalk restaurant. Management told him they had found it and it was by the front desk, but by the time he got back to the restaurant, the phone had gone missing. After several hours of searching, he filed a police report against the restaurant. The next morning he got a call from a mysterious woman who said she’d found it on the Riverwalk. He took a cab over to her house, in a dilapidated section of town. She gave him the phone and told him not to forget to tell the restaurant management it had been found. He wanted to know how she knew he lost it in a restaurant, but gave her 20 bucks for her efforts — she was no doubt the busboy’s girlfriend.

There are signs in the mall to watch your belongings in San Antonio.

The Alamo is an interesting little building. You can read about the history of the Alamo on Wikipedia. I took a tour with a group of other conference attendees; 50 of us filled the Alamo and circled around the tour guide, who took 30 minutes telling us the story of the Alamo in a low tone — being on the outside of the 50 I could barely hear him so paced back and forth and took a picture, then saw the sign that said ‘no pictures’. These days I’d prefer a shorter story by the storyteller; I’ll read all about it on Wikipedia thanks. The tour guide mentioned the Rio Grande and all of a sudden I wanted to go see it; John Wayne movies danced in my head. Rio Lobo, Rio Bravo, Rio Grande, The Sons of Katie Elder. 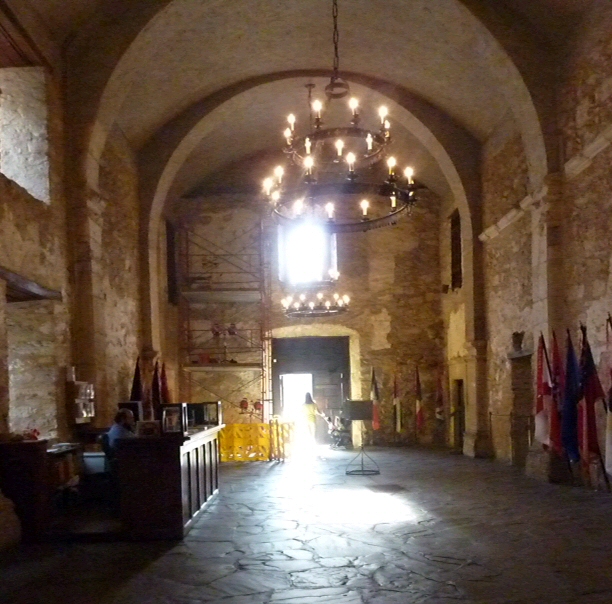 Picture of the interior of The Alamo. Not exactly legal to take this picture; not sure why.

On night three in San Antonio, I rented a car and hoofed it up to Austin to take in the Eric Tessmer Band. Mike, a work buddy and friend, joined me; we ate with other coworkers on the Riverwalk and then drove up at 9:15pm. We got up to Austin at about 10:45pm. It’s an hour and a half drive at about 70 mph all the way — I didn’t go faster because we saw about 8 different cop cars pull people over.

Austin was Austin — a great little town — and Eric Tessmer did not disappoint; phenomenal night when you can see one of the great blues guitarists of our time playing right in front of you in a small club. Tessmer played a number of songs off his new album. He finished at about a quarter to 1am; we walked Austin ’til 2am; took a drive through University of Texas — Mike is a former college football player who yearned to see their campus and football stadium; a massive building that sits 100,000. Then it was back to San Antonio, which we arrived back at by 3:30am, off to find a McDonalds so Mike could get a Vanilla shake, but their shake machine was broken so he settled for two Apple pies. We kept seeing signs for Laredo, and I wanted to take that drive; but Mike said he thought it was about a 2 hour drive. The trains run through San Antonio at night and let off their lonesome horn through the night air. Nothing like it — to be in Texas under the stars, with a Texan lone-star flag here and there, and that lonesome train horn in the distance at 4am in the morning. 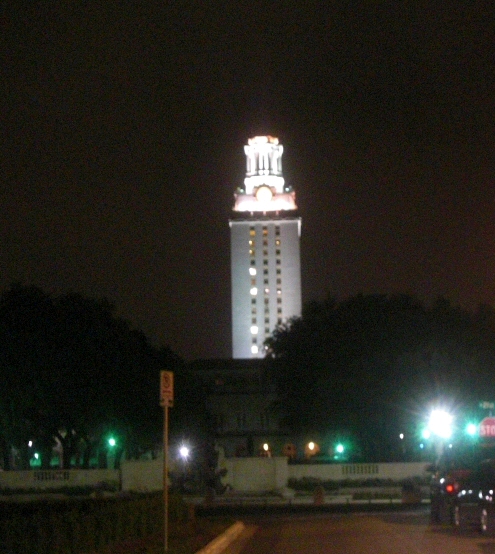 The tower at University of Texas where a sniper shot students on campus back in the 1970’s.

Final night in San Antonio I took in the Riverwalk with a customer and made that Riverwalk last until it all shut down at 11pm. Like being in Venice. Back to the hotel and up at 4am for a taxi ride to the airport and a 6:15am flight back to NYC on Continental, which is about to merge with United. I asked the taxicab driver if there was crime in San Antonio. He said no, there wasn’t much crime. In fact, San Antonio had been anointed in a recent survey as the second most safest city in the United States, he told me. I asked him how close Laredo was. He said 2 hours south by car. Laredo, he said, was a very dangerous place. People die in Laredo, if they get caught in the crossfire of the Mexican gangs fighting over drugs. Incredible in this day and age, he said, that an American city could be so dangerous and run by gangs. Like the wild west, I thought. Nothing’s changed. I hummed “Streets of Laredo” for the rest of the trip and the flight home and was even whistling it in the Bronx that night, with the #4 train roaring overhead, watching the Yankees; another world, a whirlwind away. The weekend came and it was time to crash after back-to-back 3-hour-sleep nights; well worth it — Texas is an incredible place and you want to take in as much of it as you can when there. 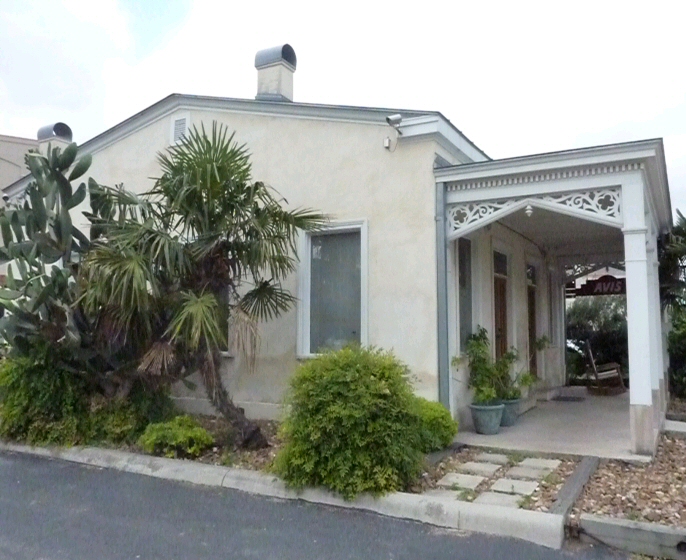 Outside of Avis building 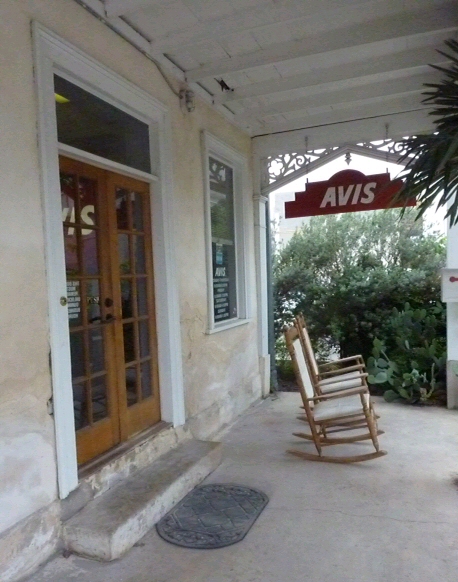 Front of Avis building, which is about 2 blocks from Alamo itself 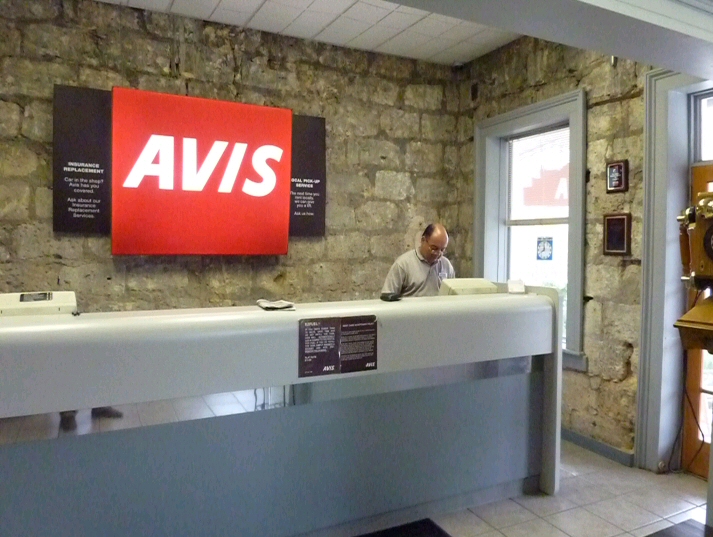 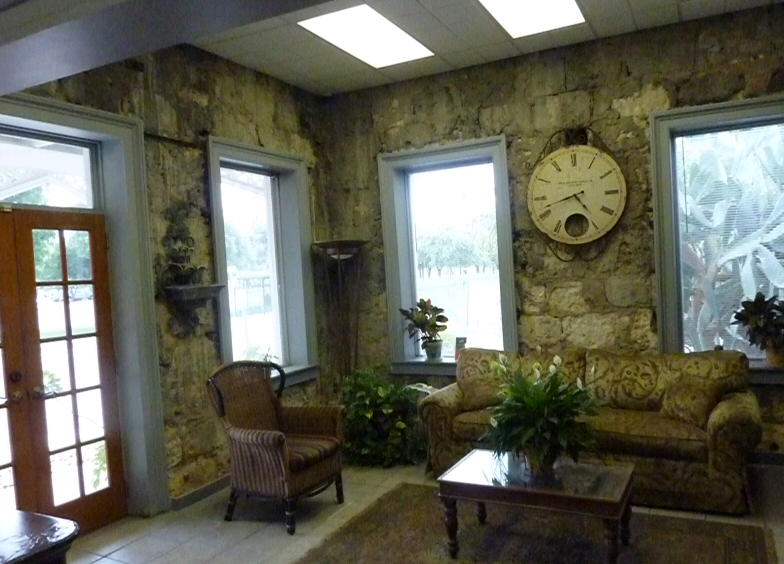 Inside of Avis building. 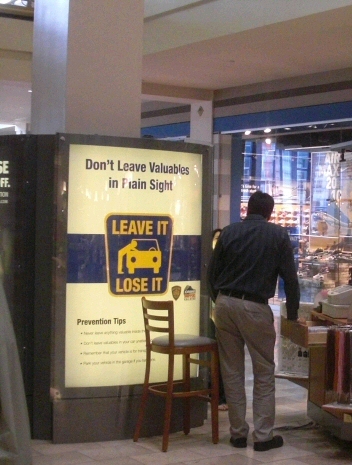 Watch your back in Texas — lots of petty crime according to the cab driver. 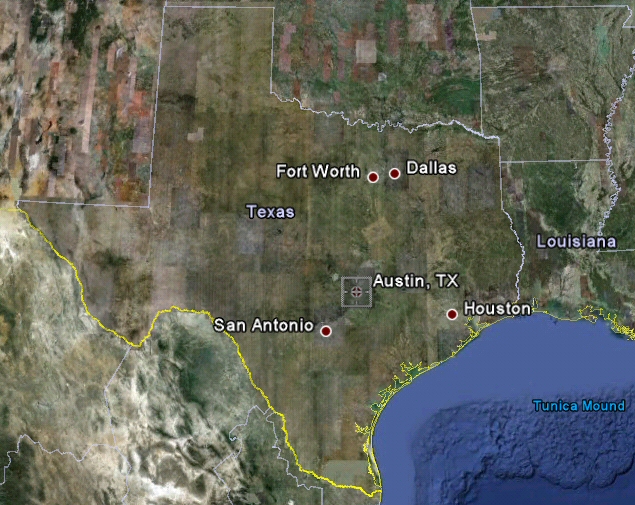 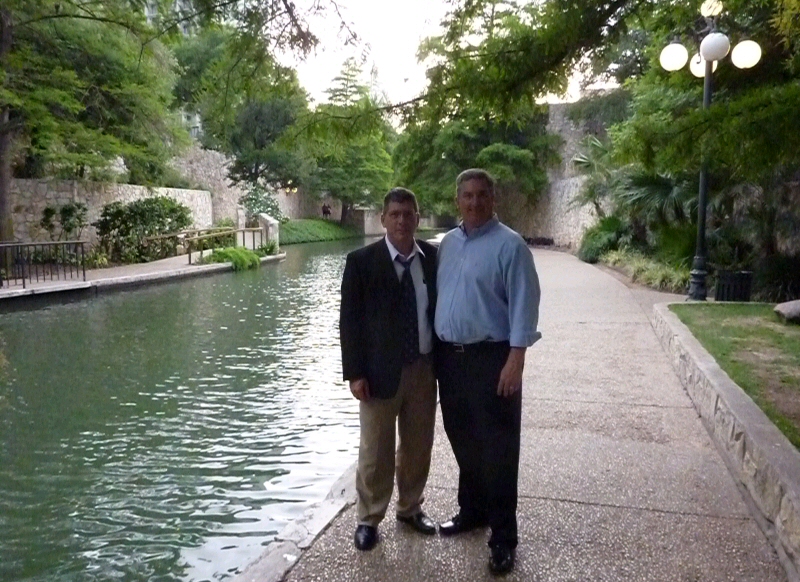 Lou and Mike at Riverwalk — by day