New York City is a city made up of many islands and one peninsula. The peninsula is the borough of the Bronx, and then there’s Manhattan Island and Staten Island, and Brooklyn and Queens which form the western portion of Long Island. Those are the five boroughs and then there are many smaller islands amongst and between — like Liberty Island (although it always seems to be in doubt whether it belongs to NY or New Jersey), Ellis Island (where all the immigrants landed; again, near the Jersey border), Governor’s Island (the former military base that is now open to the public), Roosevelt Island (home to the tram), City Island (up by the Bronx), Rikers Island (with the jail), Randall’s Island, and many more, especially if you start counting the islands in Jamaica Bay, which are mostly hassoks; Hoffman Island, Swinburne Island, Shooters Island, and Prall Island which are satellites of Staten Island; Coney Island (not really an island), and so on.

Of all of these islands, Randall’s Island remains the most mysterious. Tucked beneath the Triboro bridge, about all most sports-minded New Yorkers of a certain old age know about it is that the Cosmos used to play there. And quite frankly there aren’t too many people still alive who know what the Cosmos was, leaving Randall’s Island a complete mystery to most. 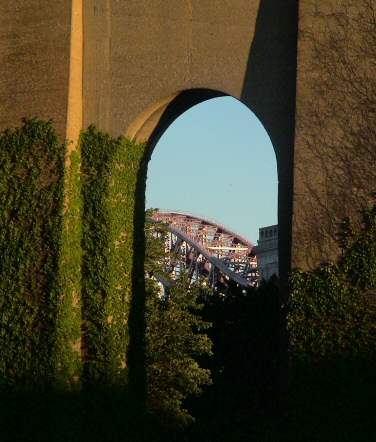 Randall’s Island is not exactly the easiest island to get to — difficult even as islands go — if you don’t have an EZ-Pass. Mine ran out a while back (after my wife’s pocketbook was stolen and we had to cancel/change all of our credit cards), which leaves me in a situation where I need to pay cash on all of NYC’s bridges and tunnels for the time being.

To get to Randall’s Island by car, you take the Triboro Bridge, which connects three boroughs (Manhattan, Queens, and the Bronx).

Which made me late for the circus. At time of writing, Cirque de Sol is being hosted on Randall’s Island. For many years it was located in lower Manhattan at the north end of Battery Park. Entering the tent for Cirque de Sol after the show has begun is difficult because it is pitch black; this circus relies on lights set against dark backdrops to create an effect. And there are many metal stairs. So if you’re going to the circus with your family in tow, including your 75-year-old mom and 10-month-old son, make sure you update your EZ-pass and take the tollbooths on the left. Otherwise it might literally take 35 minutes to navigate to your seat, with many tenuous moments in between.

Randall’s Island also contains one of the most impressive train trestle’s in the New York City area. The trestle allows Metro North and Amtrak trains to head northward to Boston and other parts north of the city.

Once on the island, you realize that this is a NYC worker’s island. The Fire Department has a training academy on the island. There are lots and lots of fire engines of all types. And there are warehouses. Plenty of warehouses with mysterious goings on. The whole aurora felt somehow familiar; like I’d been there before. The warehouses; the highway ramp that brings you down to the island. The bridges and elevated highway.. and then it hit me as I wrote this article — the closing scenes from The French Connection! Yes, indeed, The French Connection was shot on Randall’s Island.

Randalls Island as viewed from an Amtrak train headed for Boston, atop that trestle. Lou V’s hand reflects off the window of the Amtrak train.

That includes the scene at the end, where Frenchy’s henchman is leaving the island only to see what looks like the entire NYC police force waiting for him at the other end of the ramp to the Triboro Bridge, with Gene Hackman holding up his badge!

And the warehouse, where Gene Hackman chases Frenchy then accidentally shoots his partner — a Randall’s Island warehouse! Perhaps the one pictured below. 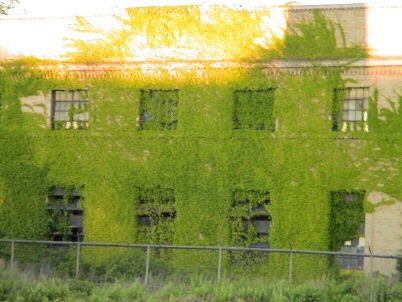 Abandoned-looking warehouse building on Randall’s Island is not actually abandoned, despite the fact that ivy covers the walls and windows of its back side.

Sports facilities share equal billing on Randall’s Island. Like I said, the Cosmos made Randall’s Island their home — specifically the old Downing Stadium — before the soccer team moved to Giants stadium in the 1970’s and won a couple of league titles.

Today, Downing Stadium has been replaced by the new Icahn Stadium, opened in April of 2005. There are also numerous public ball fields on the island.

There are a couple of 10 to 12 story buildings viewable on Randall’s Island, which from first glance weren’t distinguishable as residential or office buildings, begging the question “does anyone live on Randall’s Island”? This is the question I hear asked daily by tourists about Staten Island when I disembark the Staten Island Ferry for home. For Staten Island — 19 miles long by 8 miles wide — a silly question, but for Randall’s Island — not so silly. The answer — according to Wikipedia — Randall’s Island is joined to Ward’s Island by landfill (a Robert Moses project hatched in the 1930’s), and the two islands together have a population of 1,386 living on 2.2 square kilometers, according to the 2000 census. Another mystery revealed — many New Yorkers interchange the names Ward’s Island and Randall’s Island, thinking that one must be the prior name and the other must be the new name of the island — when it really is one island with two names, and two separate histories.

Upon leaving the island, my 75-year-old mom said she had visited the island many times in her youth; it was the frequent location for school-sponsored picnics and athletic events. So there you go — Randall’s Island wasn’t such a mystery after all.