My second trip to China found me in Beijing, not nearly as scary and inspiring a city as Shanghai, which had me thinking I was visiting the Death Star in Star Wars – Beijing was more like Brooklyn (where I was born). Brooklyn’s building structures — lots of 4 or 5 story walkups and 10-story apartment buildings — and population density are similar to Beijing. In fact, more so than ever after the massive immigration of Chinese into Borough Park, Brooklyn over the last 10 years.

Except Brooklyn doesn’t have the Great Wall. On the first leg of this trip I was to attend an event in a place called the Hotel Commune by the Great Wall. What a name. I was going to be living in a commune in China. The “Great Wall” part of it didn’t register.

I arrived in Beijing in its evening, and hired a cab as instructed, providing the driver with a paper with directions to the hotel in Chinese. I sat back and enjoyed the ride. I didn’t expect the ride to be that long – but it was over an hour and a half — we drove out into the country in the dark of night on the China highways. I started to wonder if the cab driver read the instructions right or if he was taking me god knows where. As we got farther and farther from the city, more and more trucks enveloped around us on the highway, big Mack-like trucks with very aggressive driving by our cab driver and the trucks all around — in the dead of night at the 1 am hour — trucks honking at each other all around us, with us cutting in and out of traffic. Crazy. Where the heck was I? China? 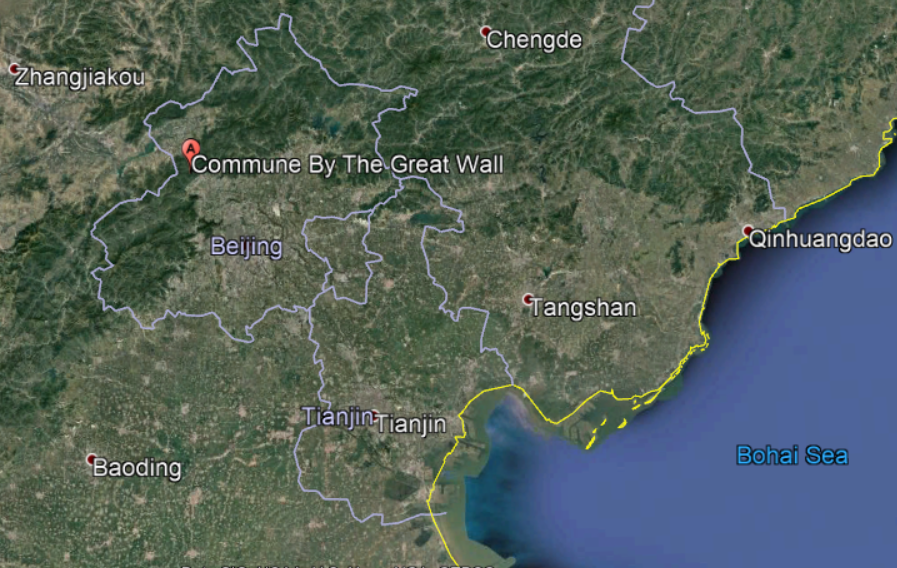 We finally got off the highway and took a long expeditious path up a long hill through quiet forested residential streets that was nothing like Brooklyn. Finally we arrived at a gate that was opened for us and we drove another few minutes through the grounds until we arrived at a well-lit, low-slung modern building — the hotel’s main building and entrance. I was greeted by doormen in spiffy white shirts and black pants; the female receptionists were dressed in similar outfits: everyone very polite and efficient. 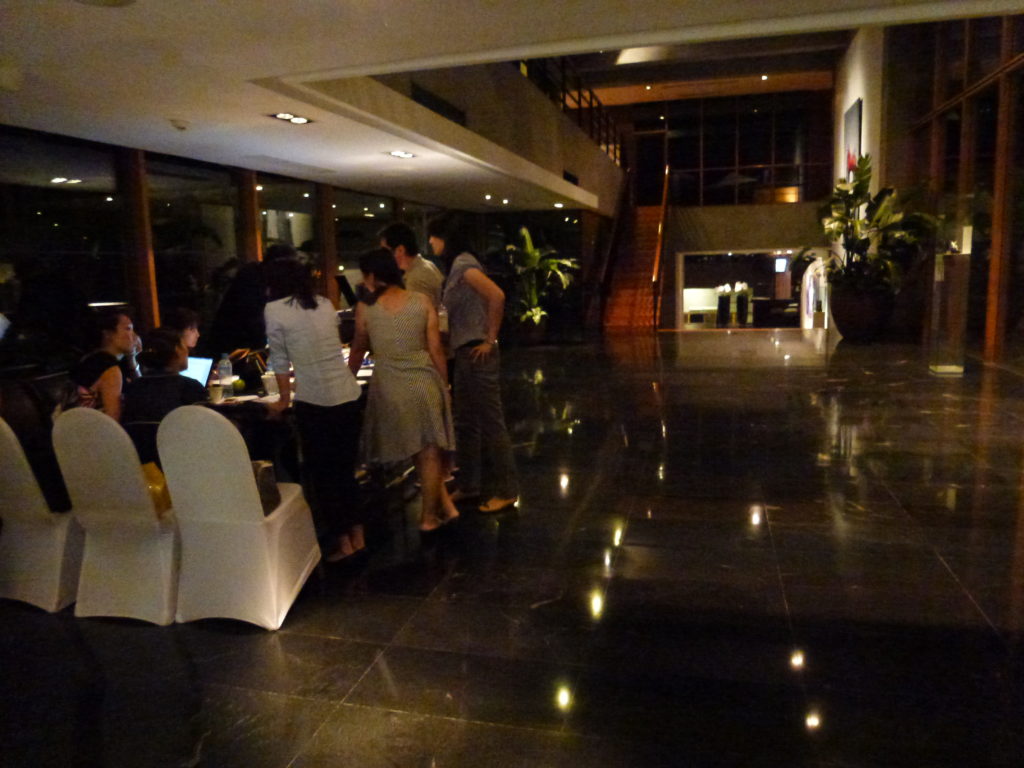 I checked in and they told me the building I’d be in was four buildings away down the road. I learned the Commune by the Great Wall hotel consists of a dozen buildings each designed by a different high-profile Asian architect. Each one more amazing than the next — depending on your taste. I found my building, walked in the main entrance, and climbed modernist stairs to the second floor — my room took up the entirety of the second floor — a private villa. Some commune! 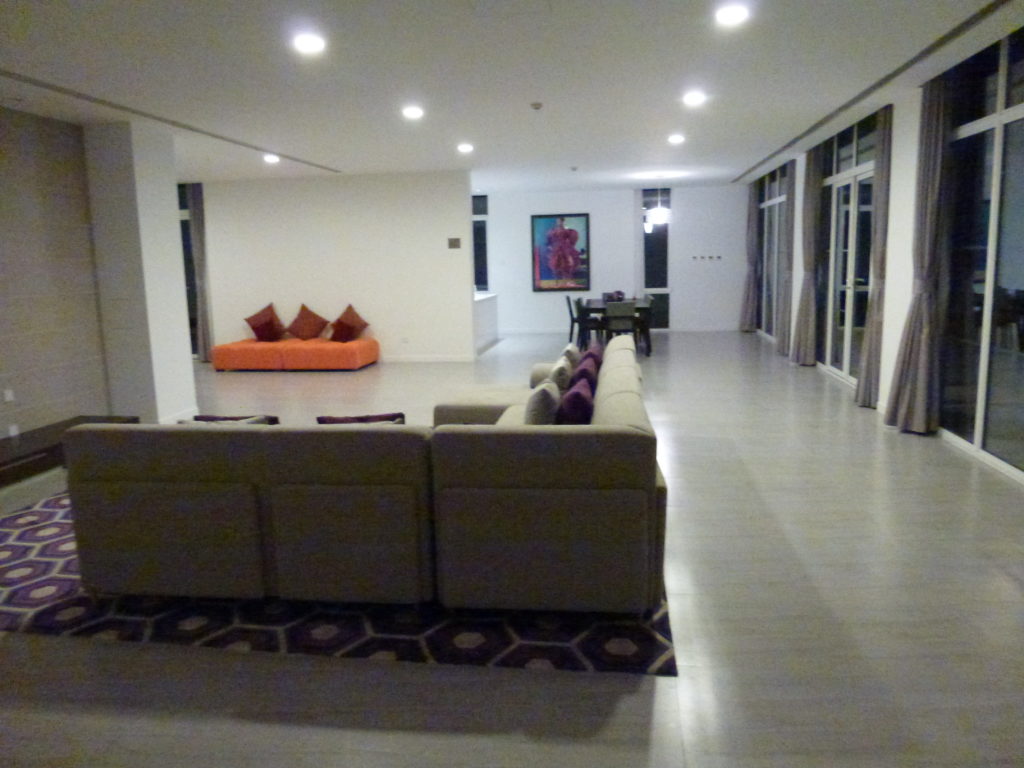 In the morning I went back to the main building to attend the event and give my presentations, etc.  I could now see the hotel grounds clearly. This was a very woodsy area but an attempt had been made to line the grounds with flowers. I felt like I was in the Catskills. 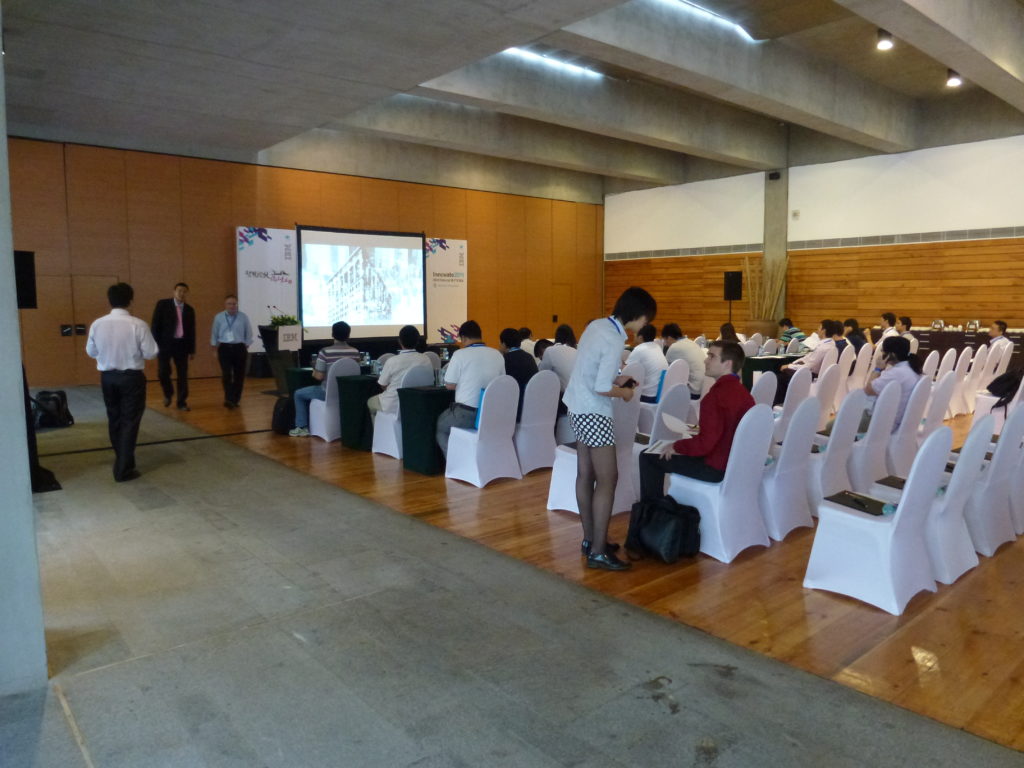 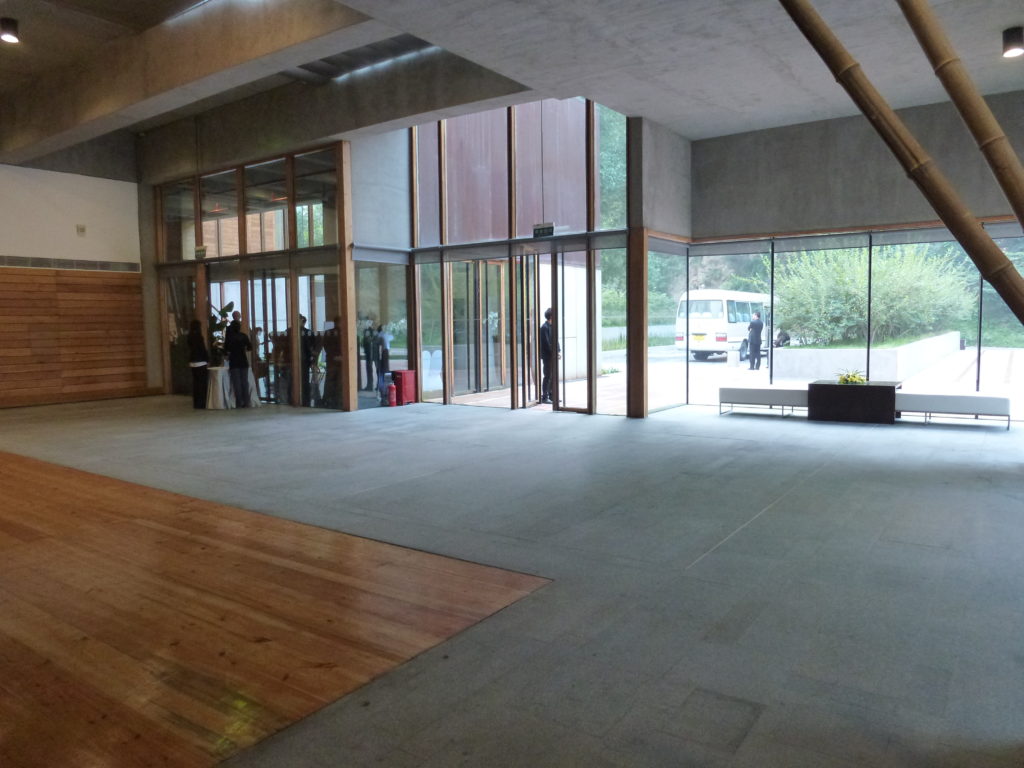 Off to See The Great Wall of China

As the workday ended, with presentations made and customers met – I took off on foot on the trails behind the hotel, which promised to take me to The Great Wall after a 30-45 minutes hike.

I climbed through a forest for 35 minutes and finally arrived at the base of The Wall. 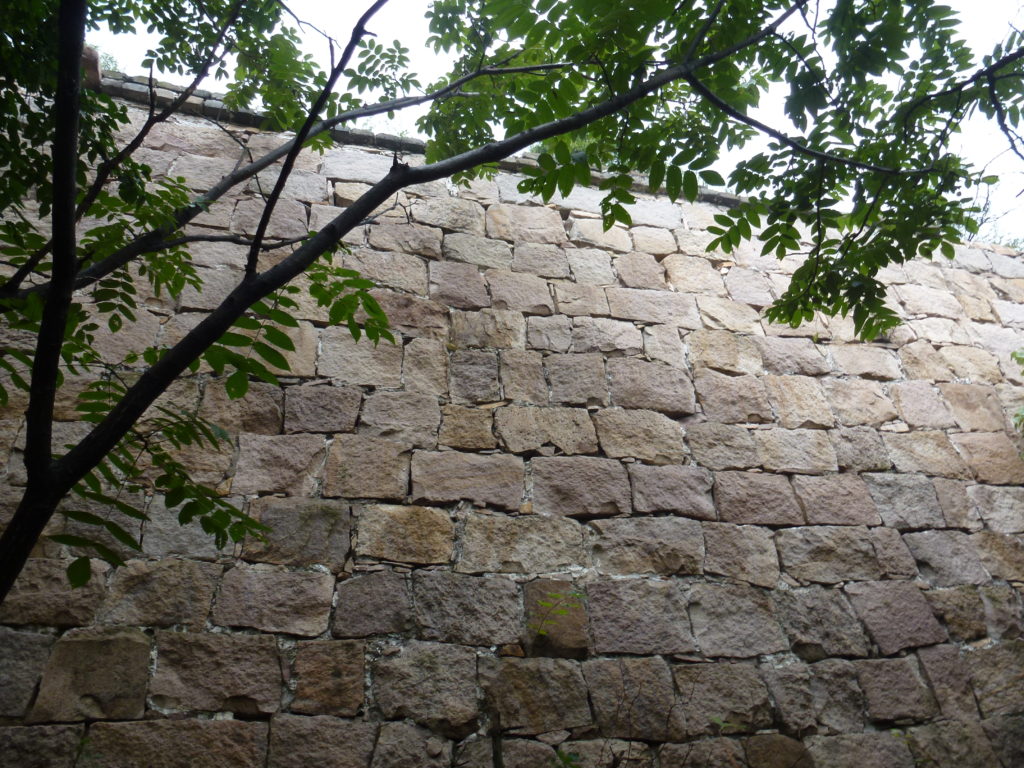 This wasn’t The Great Wall you see in pictures, in the touristy areas where the Wall is kept in great shape. This part of the Wall was in absolute disrepair – dangerous disrepair.

I climbed a steep embankment to get atop the wall. And there it was laid out in front of me. 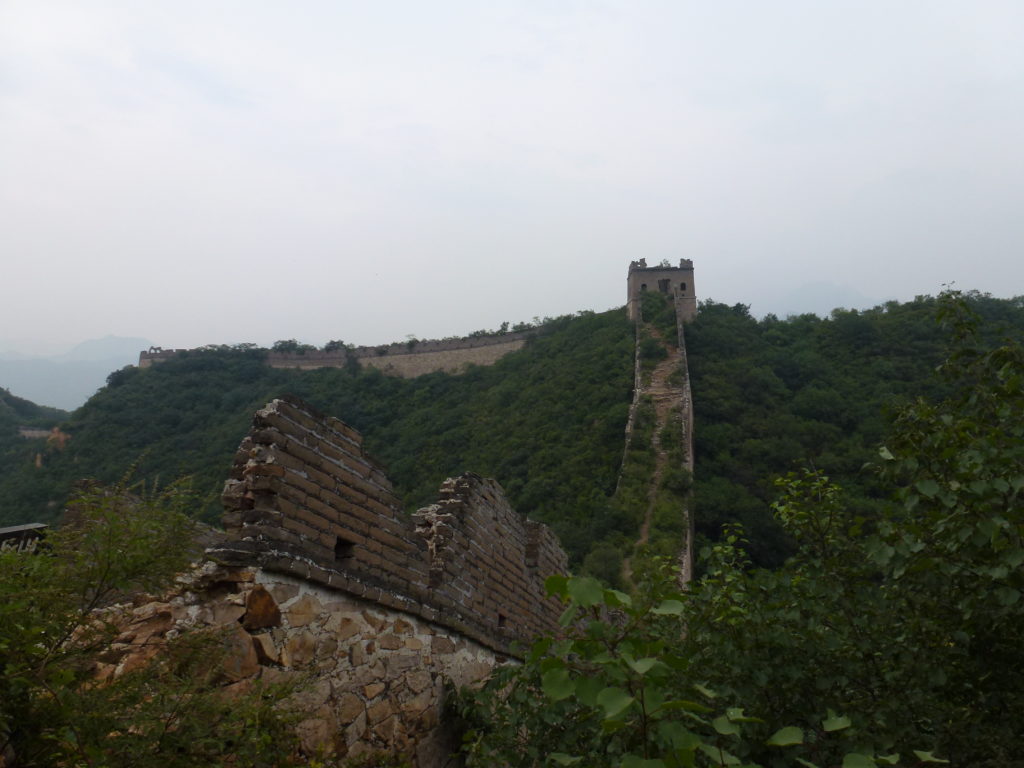 It was literally scary to climb to the main walkway of the wall — the newness of the situation, the steepness of the path. I was by myself — nobody around.

The pictures here don’t do the steepness of the path justice. I was determined to get to the first guards booth. At first the precariousness of the walk seemed a little scary, but once I got the hang of the terrain, making it to the guards booths was pretty easy.

I was on top of the world – high up – in the ruins of what had been a place with Chinese soldiers who had guarded the wall thousands of years ago. By myself. What an incredible feeling. 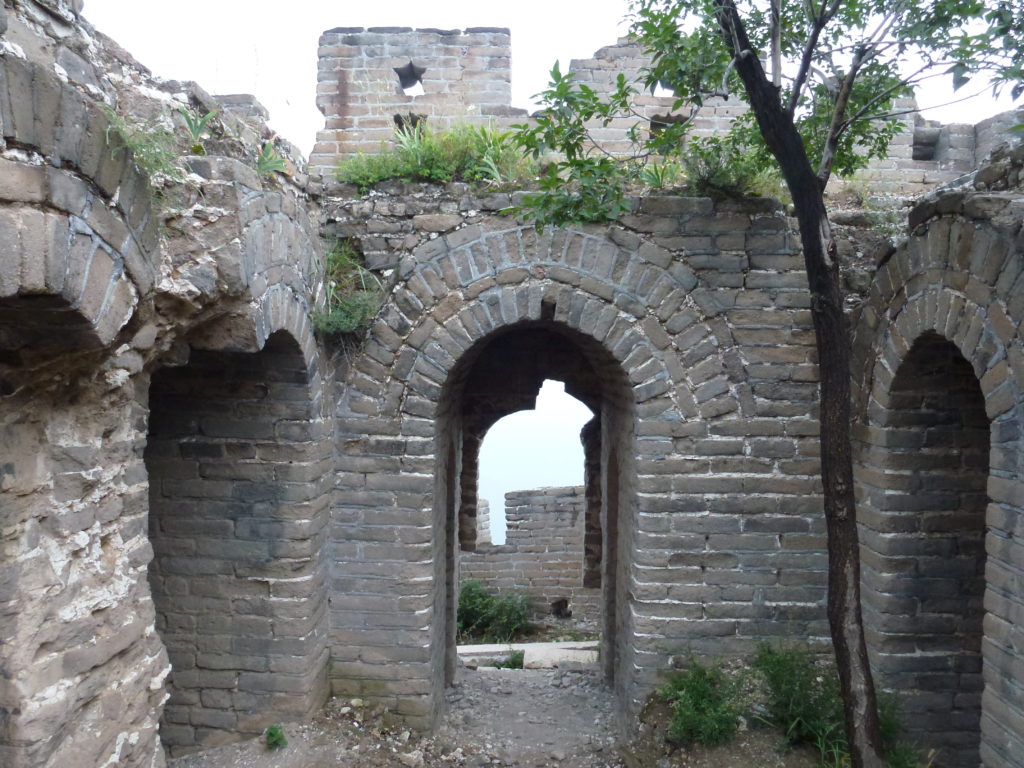 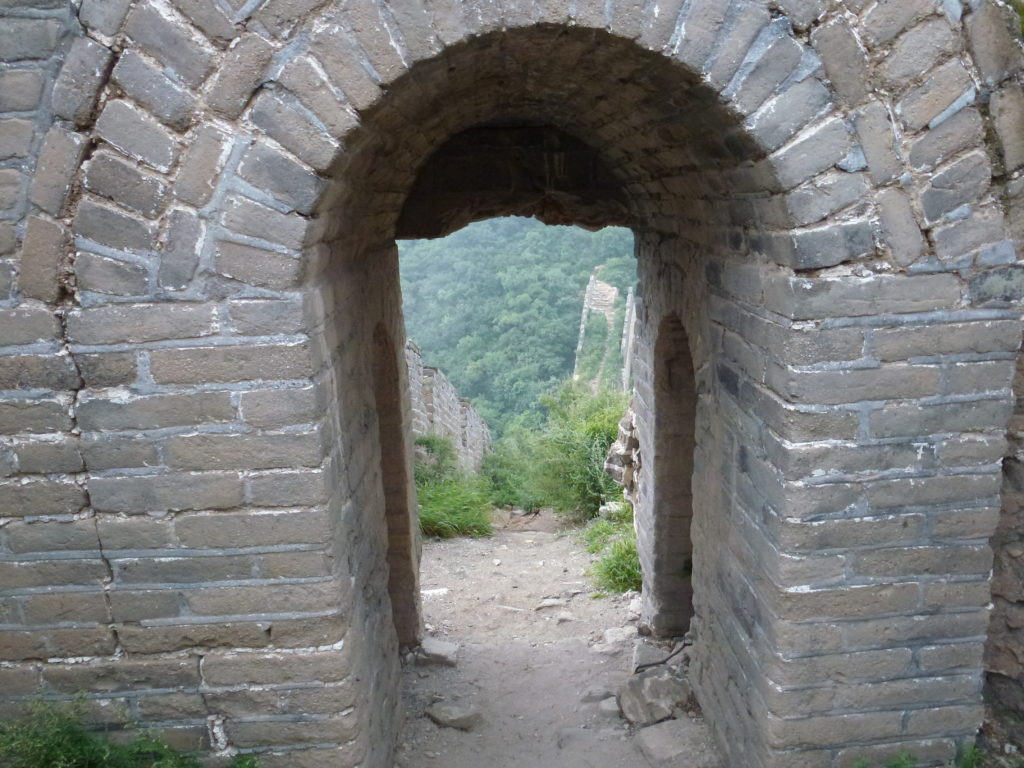 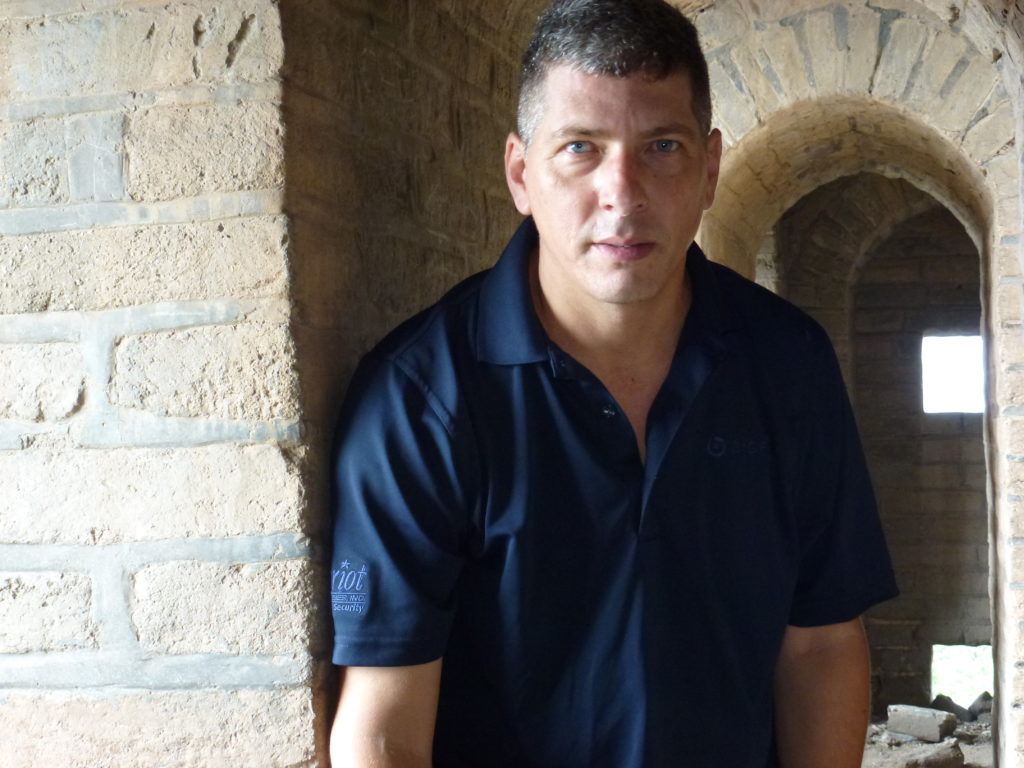 And then after 20 minutes scrummaging around – a storm rolled in. The sky turned dark blue with thunder and lighting and rain. I took shelter in the guards booth. One of the most amazing experiences I’ve ever had.

The rain only lasted 10 minutes and I was out again exploring the wall. 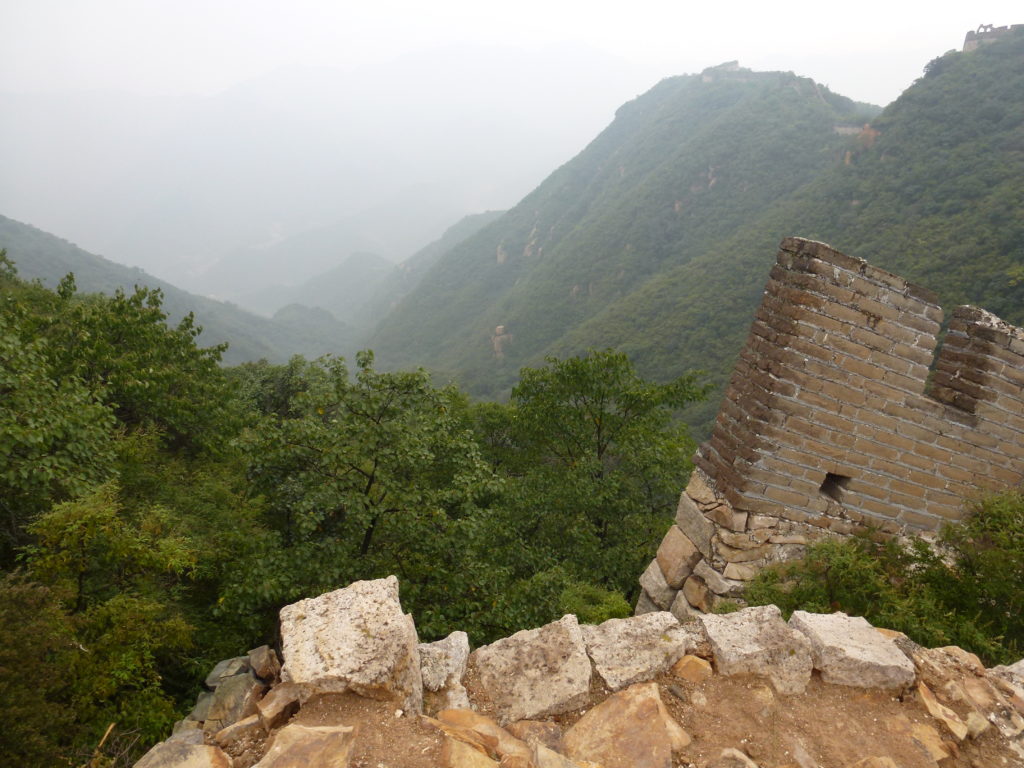 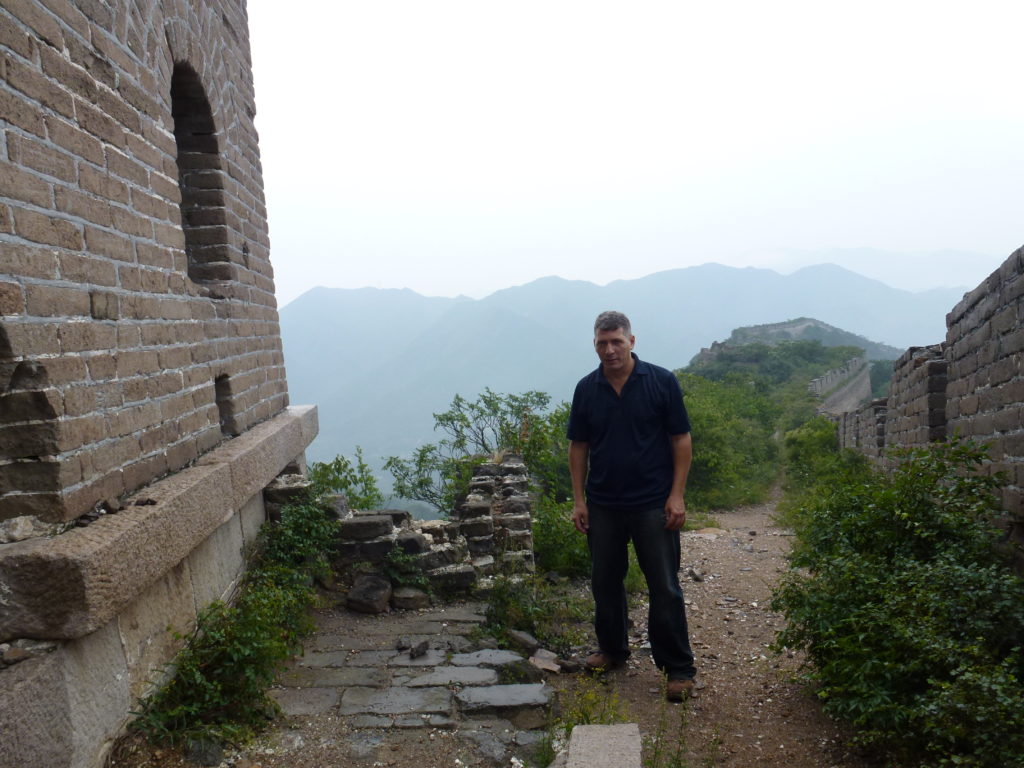 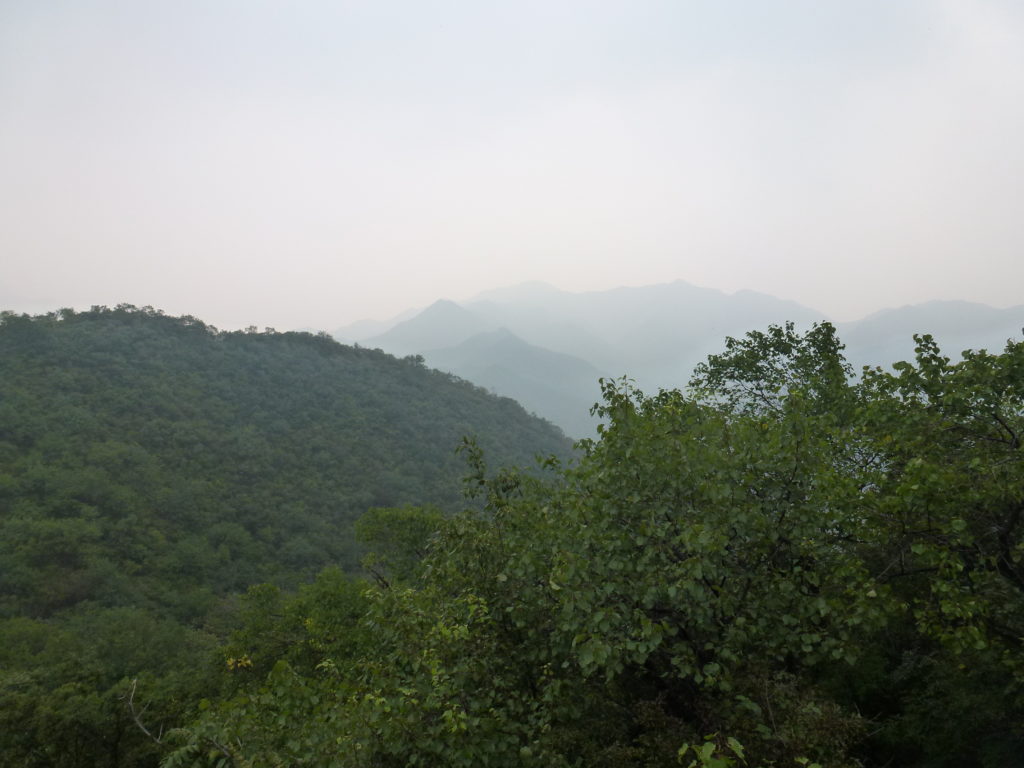 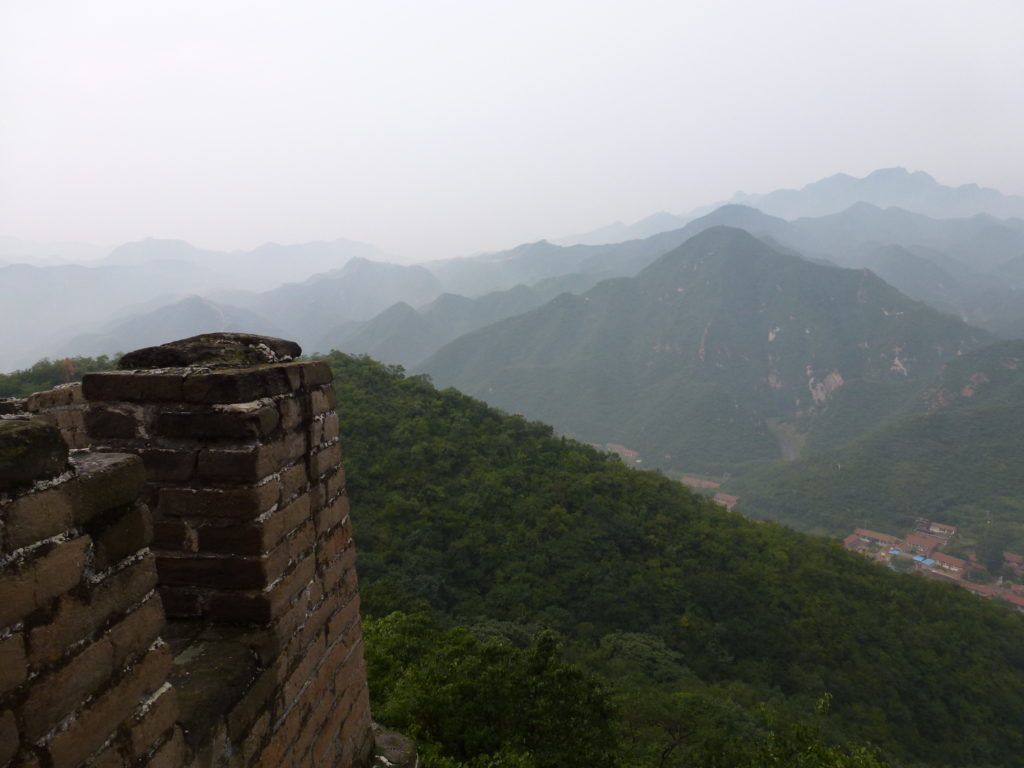 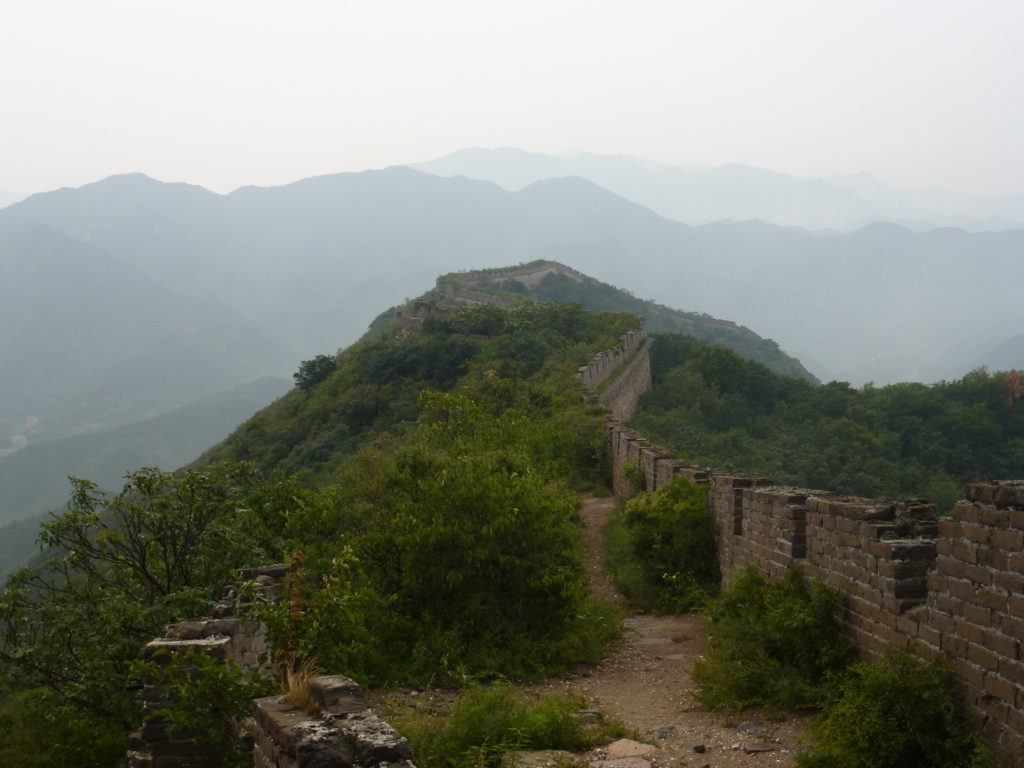 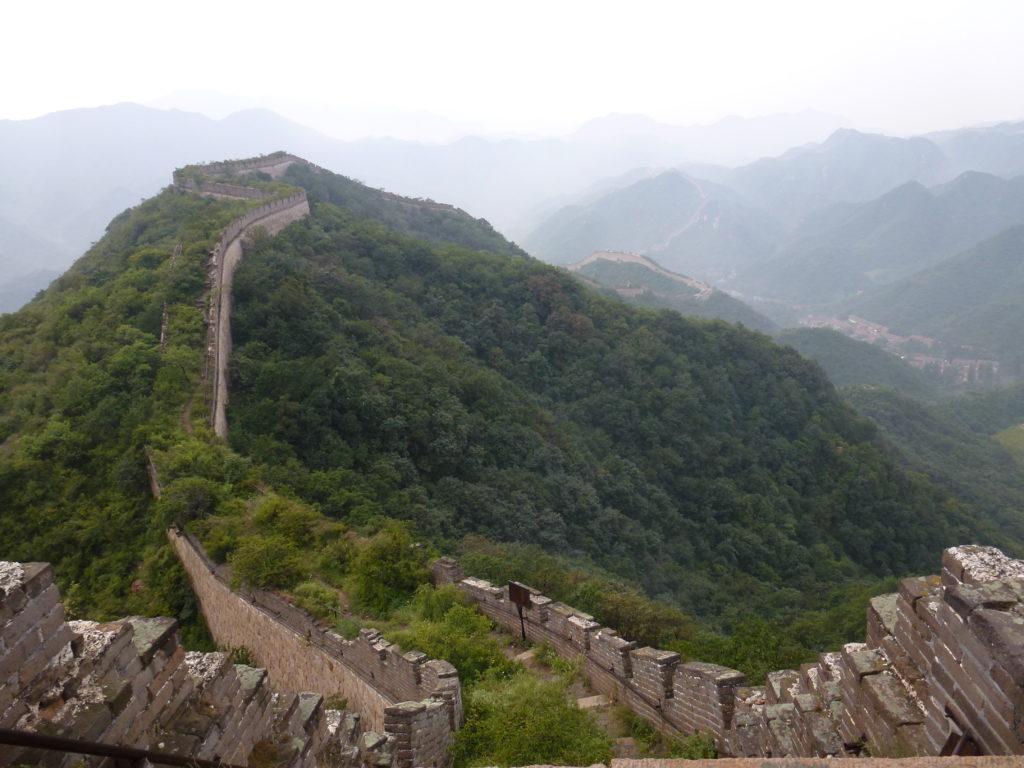 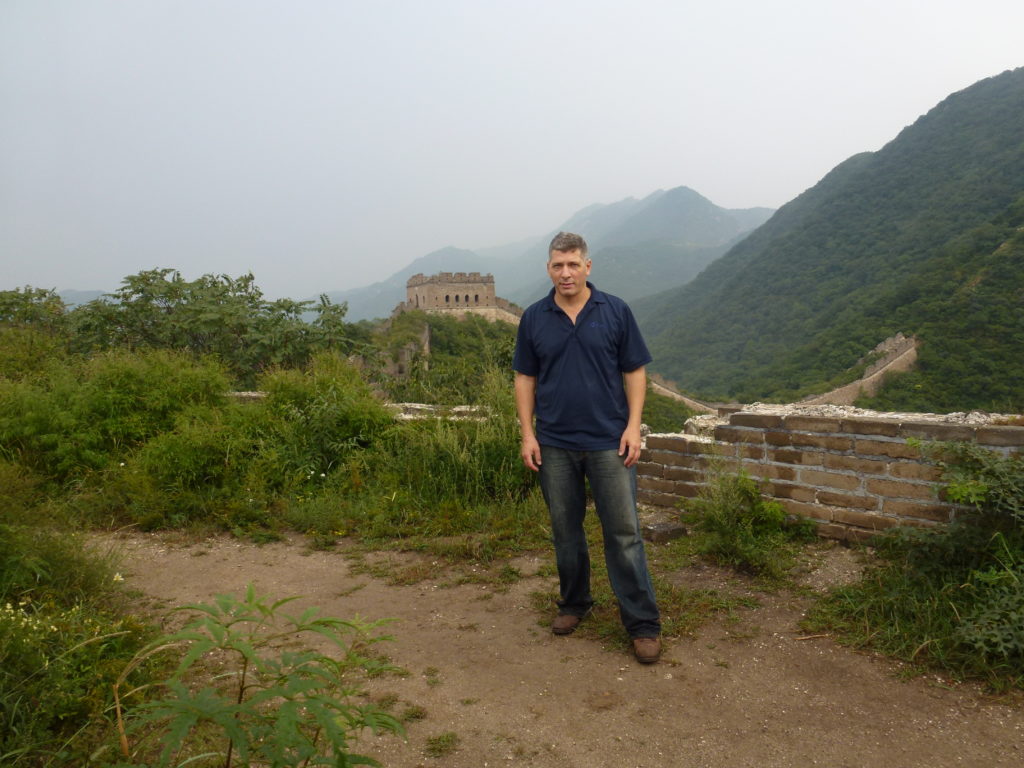 After about an hour on the wall, I began to head back. Low and behold as I was nearing the entry point to where I’d climbed onto the wall — I heard a bellowing Austrian voice — it was the GM of our division, Kristoff, with his wife. They’d come to see the wall. So I walked back with them up the wall; we took each other’s pictures. 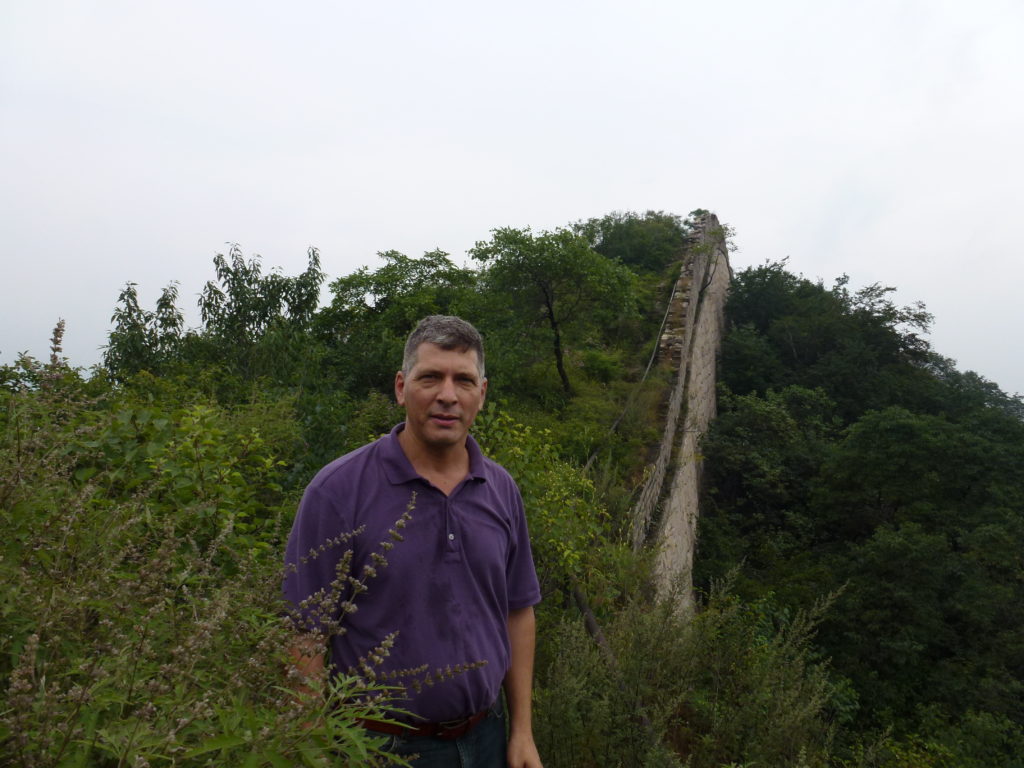 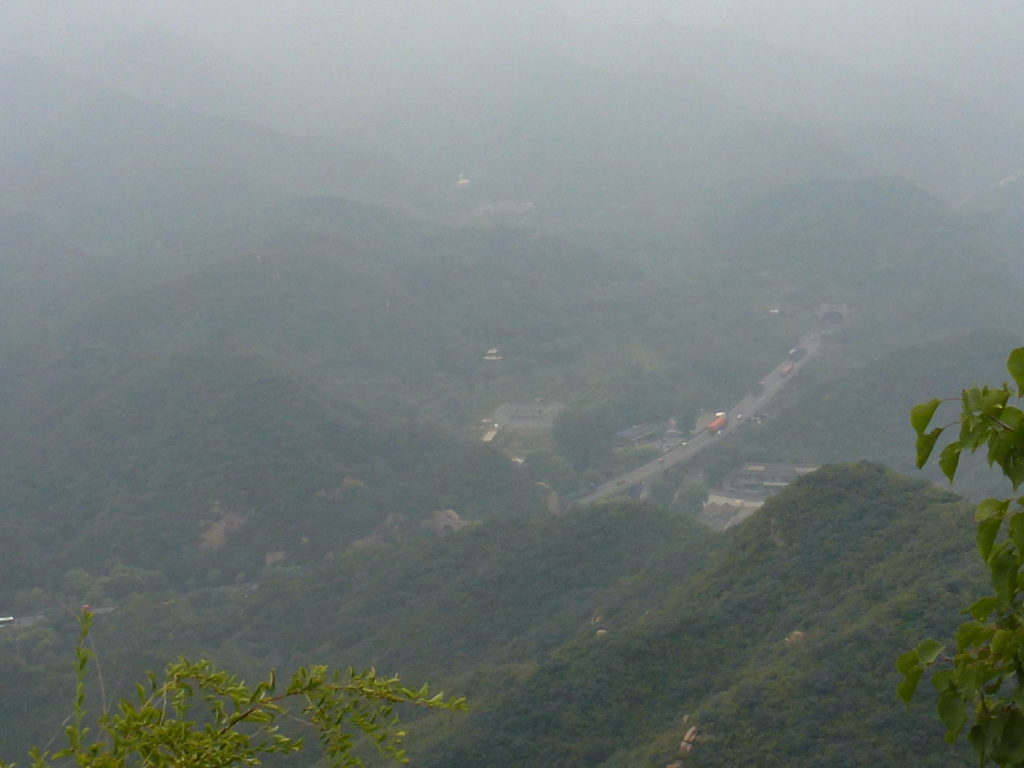 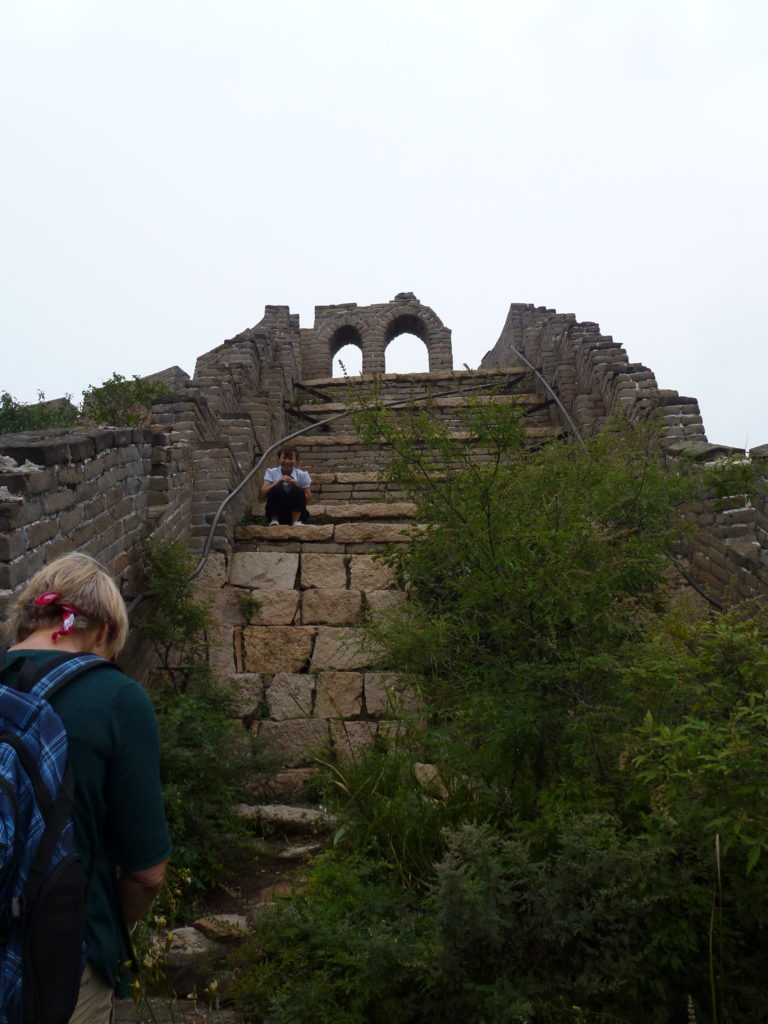 Kristoff was well versed in the history of the wall, and the invasions the Chinese empires had repelled. His war knowledge seemed to fit his robust personality — the General Manager of a 5,000-person division. Or maybe he just read about the history of the wall before the trip, versus ignorantly plowing forth as I had. After another half hour on the wall, we all walked back to the hotel together, talking about .. current-day schooling practices in the schools are kids were going to.

I returned to The Wall after day 2, and took in the serenity and the scenery and the history. My hope was that I’d return again someday — but if not, I soaked in the atmosphere, and picked up a bunch of rocks and put them in my backpack. Wasn’t sure if I’d be allowed with them thru the airport but was determined to try. Today they sit in an acrylic display case in my dining room — rocks from The Great Wall of China.